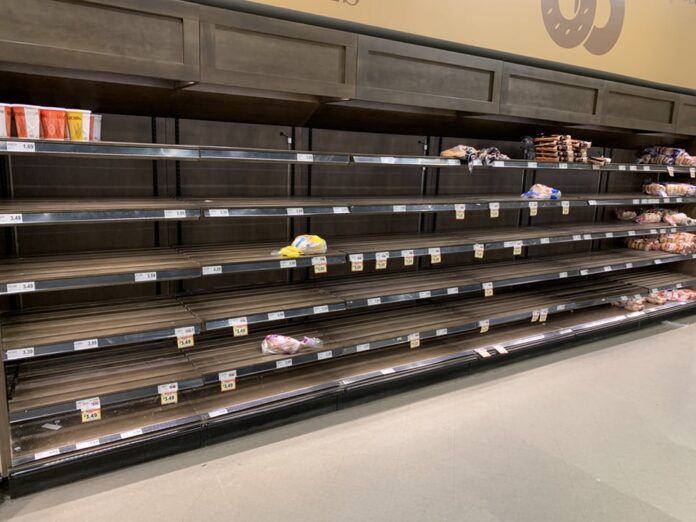 Grocery stores have been overrun day after day since the coronavirus pandemic began. While consumers have been flocking in record numbers to shop for staples, demand by restaurants and others in the foodservice industry has been down. Add to the mix concerns over labor shortages on U.S. farms and farmers are in a panic.

The viral outbreak has driven livestock and crop prices down. Some farmers were already struggling due to droughts, flooding, and other hardships that have plagued the industry in the last few years. The trade war with China also put some farmers out of business altogether.

Trade groups have been lobbying the Trump administration on behalf of farmers. They want financial aid for America’s farmers and more expedient visas for its Mexican farmhands.

Robb Ewoldt, an Iowan farmer, said: “We were hoping for something good this year, but this virus has stopped all our markets. We were already under extreme financial pressure. With the virus sending the prices down, it’s getting to be the straw that broke the camel’s back.”

Planting season begins in April for many farmers and possible labor shortages couldn’t come at a worse time. Moreover, President Trump has restricted Mexican migrants from entering the U.S. Mexican labor is inexpensive and helps keep many farmers afloat.

Meanwhile, consumer demand for meat items like chicken and beef are down due to restaurant closures. Many states have shuttered businesses and ordered people to stay home. Families are also focusing more on nonperishable staples like beans and pasta when they venture out to the grocery store.

Low oil prices and reduced driving across the entire U.S. have cut ethanol demand. And that means less demand for corn which is a by-product of ethanol. This has hit corn farmers particularly hard.

Soybean and corn farmer, Ewoldt, said he lacks the capital to farm on a big scale. So, he plans to farm using less land.

“We’ve stopped saying it can’t get worse,” said Ewoldt. He acknowledged that it’s taken numerous years of financial losses leading to this point. But, the falling prices due to the coronavirus have stunted any massive farming efforts. “Our corn operation is not profitable anymore,” Ewoldt added.

The dairy industry is also hurting due to restaurant and school closures. Analysts expect milk prices to drop by up to 25 percent this year.

Nathan Chittenden, a dairy farmer in upstate New York, said: “It comes down to every business’s ability to absorb loss. All those coffee houses and restaurants closing in the city not using cream is a huge hit to us.”

Chittenden said if infections continue to surge in the state, he may not be able to move his product if truck drivers can’t get to his farm to pick up milk. Chittenden points out that farms are accustomed to weather interferences on farm operations and those are temporary. “But not this prolonged situation,” Chittenden said.

Livestock producers in the U.S. are urging the Department of Agriculture to delay paybacks for government loans. Many are hopeful the government will offer financial relief which would include bailout packages.

The massive stimulus bill passed by the Senate and House of Representatives includes $14 billion for the Agriculture Department’s Commodity Credit Corp (CCC) spending authority. It also includes $9.5 billion for farmers experiencing losses during the pandemic.

However, the National Cattlemen’s Beef Association wants the CCC amount increased to $50 billion and sent Congress a letter inflecting that.